Introduction: Current trends show that many people, mainly young generations, are inclined to crash dieting by adopting various fad diets visible in popular search engines. Fad diets may be helpful in very few cases if customized for a particular patient or a person. As per current topics, metabolic syndrome is a severe issue that may be a single disorder or a group of diseases that often affect many people.

Materials and Methods: A systemic review was conducted by searching and selecting open-sourced articles in Medline, EMBASE, SCI, Cochrane databases. Free text search and selective vocabulary terms relating to fad diets, crash dieting,weight-loss diet,metabolic syndrome diets, health,etc., were used for an online search. After extensive literature search and filtration of studies, finally, 13 studies were selected for the systemic review with the help of NVIVO 10 software.

Results: 'Word frequency'under the query section was used to analyze word frequency as per criteria. The searching text option was considered at the 40% level by choosing the 20 most frequent display words with five minimum lengths. The study showed the most focussing word 'weight' with 0.55% and 716 counts followed by 'health' with 0.41% having 620 counts in the word frequency list among all the 20 most used keywords in all the papers. Similarly, the word 'diet' was used in 561 counts with 0.43%. The study also demonstrated word cloud figure and cluster analysis by word similarity. Hence there was no need for other coding and meta-analysis as all papers were imported from Mendeley for review

Conclusion: More research is needed on the fad diet and metabolic syndrome; however, authors are concerned about public health safety.

Fad diets or crash diets are becoming popular day by day, expecting quick weight loss and subsequent health benefits from other lifestyle disorders. Obesity is one of the significant burning issues that has increased three times in the last three decades (1.9 billion reported in 2016 by WHO). Simultaneously more than 35 million children have been reported as obese as per the record available from WHO 1, 2 The extreme diets, also called fad diets, have been practiced by many populations, mainly in metro cities and urban areas. The quick loss of weight by the improper and unscientific ways without calculative diet plans are often a cause of serious health hazard in various countries including India. The fad diets may reduce weight within a short time, but it comes back its position if discontinued. The fad diets somehow minimize weight, but the respective person often faces some health complications. 3 Commonly, they are weakness, hypoglycemia, hypo tension, hypovitaminosis, and other nutrients deficiencies. Sometimes, a concerned obese person may face many troubles to get back the lost health in total. 4, 5 Young girls and middle-aged women are another population group highly affected by obesity and crash dieting. The polycystic ovarian syndrome is one of the pervasive endocrine disorders among obese women,mainly resing in cities. Many studies showed that dyslipidemia is significantly correlated with PCOS women who always showed higher triglycerides and lower high-density lipoprotein cholesterol. 6 So metabolic disorders happen due to their improper lifestyles that can be compensated with proper diet and daily exercise for some time. In western countries like America and Europe, almost 28% of obese women are positively correlated with PCODin addition to type II diabetes. India is another prominent example undoubtedly. 7, 8, 9, 10, 11, 12 In general, Metabolic syndrome (MetS) is a group of metabolic disorders that include central obesity, hypertension, diabetes, dyslipidemia, atherosclerotic or non-atherosclerotic cardiovascular diseases. 9, 10, 11, 12, 13

Exclusion criteria: The articles were excluded based on keyword search and precisely researched obesity, PCOD, and cardiovascular diseases. Further, adult populations had been considered only but not children. The diet patterns which are scientifically proven already not included as these are not our discussion. 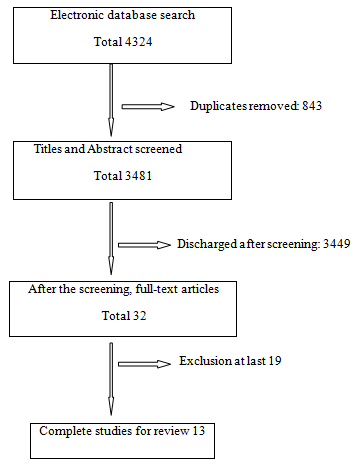 A total of 4324 articles were searched in the various electronic database, including scholarly articles in Google as search engines. Total 3481 articles came into the shortlist after the removal of 843 duplicates articles at the primary level. A whole 3449 numbers of articles were discharged and finally selected 32 with full papers based on inclusion and exclusion criteria by following the relevant keywords. At last, 13 complete studies were finally selected in this review study divided into 3 tables by reviewing the following health issues such as i) Obesity, ii) PCOS & iii) Cardiovascular disorders. 18, 19

NVivo 10 as software has been used for data screening and data analysis. All 32 articles were uploaded as pdf versions in Mendeley, followed by exporting into the computer's'my collection' (RIS formatted file). The 'my collection' file was uploaded to analyze the studies. 18, 20, 15

Word frequency under the query section was used to analyze word frequency as per frequency criteria by searching text option at the 40% level of search by choosing 20 most frequent display words with 5 minimum length. A total summary of all 20 words has been noted in a table with their percentage position irrespective of uses in the papers as keywords (ref: table.2).The words cloud image has been considered and showed here for better understanding ( fig-2). A cluster analysis of all 13 papers has also been done, and the figures have been guiding here in this article (fig.3).

The systemic review study sorted and finally selected 13 research articles that were 12 in 'internals' 1 in 'externals' under the part of 'sources.' In addition to that, memos were attached in the same position. Still, the memos were not included for analysis. Hence, the articles uploaded in Internal Sources have illustrated the total picture of the reference chart mentioning all authors' categories irrespective of the articles' publications details. In this review study, the final inclusions were the year of publication, name of titles of the individual articles, and their volume, issue, pages, section, and a secondary title, if any. (ref: table.1). The analysis has been done in three parts which concerned all types of fad diet and various diseases. Secondly, the importance of diet and exercises focusing on crash dieting effects. Lastly also the papers related to cardiovascular diseases and types of diet applied.

The study analyzed the primary 20 keywords that were used in the selected papers in the reference list. Out of which, weight as a word got maximum weight age that showed 0.55% with 716 counts followed by 0.41% with 620 counts in the word frequency list among all the 20 most used keywords in all the papers. Similarly, the word 'diet' was used in 561 counts with 0.43%. I have only demonstrated word frequency at 20 words search level and cluster analysis by word similarity in the paper. Hence, there was no need for other coding and meta-analysis (table.2. & fig.4).

1 showed the complete list of all articles finally selected. All the papers discussed the various trending fad diets or crash dieting often used worldwide based on their literature survey. From 2005 till 2020, as current years sorted and selected articles were considered for this systemic review. In case no data then noted as unassigned.

The above table demonstrated and reviewed all the related keywords frequently observed in the 13 studies. The words were focused as per study perspectives with the percentage, count, and length. Therefore, fad diets highly matter with weight, obesity, cardiovascular diseases, and overall metabolic syndromes as per the author's work since 2005. At the same time, figure 2 and figure 3 demonstrated word cloud and word frequency flow consecutively, focusing on the most used keywords for current and future research 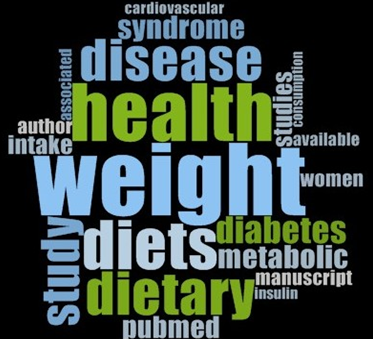 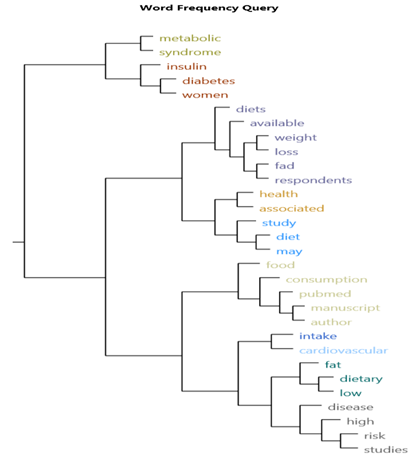 Sources clustered by word similarity considering ten clusters as per the study perspective. 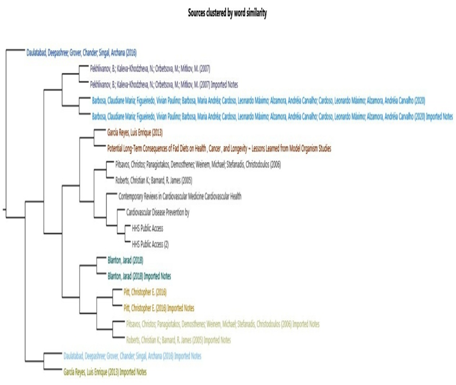 Author vs. Type of work as per Reference list of all selected studies 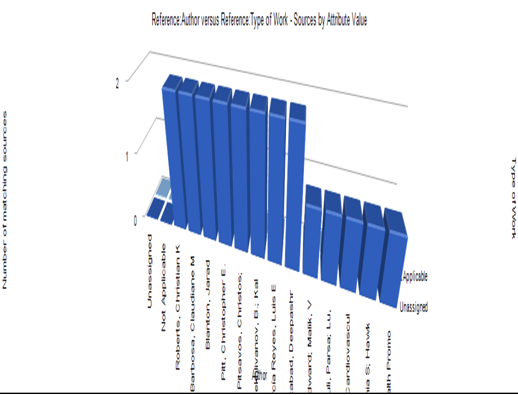 Reference list based on the literature of diet &metabolic syndrome

Reference list based on the literature on diet, exercises, & metabolic syndrome

Reference list based on theliterature on diet & cardiovascular diseases

As per analyzing 13 research articles, 20 keywords were mainly highlighted based on a maximum of 14 lengths and a minimum of 5 lengths. The 'weight' is visible as a mostly focussed word due to the full implementation of fad diet on weight management by the ordinary people considering an instant response. As per word frequency query results,weight was mainly visible, followed by health and diet. This denotes that studies in the subject of weight management and fad diet, the two keywords primarily used in search engines and other databases.

The word cloud also depicted that fad diets are often discussed for weight management among women worldwide. The point was further strengthened by the cluster analysis that authors are concerned with the work type by references irrespective of attribute values. 25, 26, 27 The review study was the done for the well-being of the society who are directly or indirectly not aware of the proper uses of diet plan. However, other important factors such as social awareness advise to practise yoga and other exercises to cope with syndromes such as hypothyroidism, poly cystic ovarian syndrome, diabetes, and different lifestyle diseases. 25, 26, 27, 28

The systemic review study is essential for a severe issue like cash dieting practices through various unscientific fad diets for instant weight loss or metabolic syndrome. As scientists or medical professionals, authors are currently highly concerned about public health safety towards fad diets. The reason is they are not often customized or following respective published dietary or other medical guidelines. More research is required to understand the fad diets' safe and unsafe parts for metabolic syndrome.

M A Ganie S Kalra Polycystic ovary syndrome - A metabolic malady, the mother of all lifestyle disorders in women - Can Indian health budget tackle it in future?Indian J Endocrinol Metab201115423941https://www.ijem.in/article.asp?issn=2230-8210;year=2011;volume=15;issue=4;spage=239;epage=241;aulast=Ganie

D Daulatabad C Grover A Singal Quality of life and psychological impact of premature canities: A study from North IndiaEye2016132432https://www.pigmentinternational.com/article.asp?issn=2349-5847;year=2016;volume=3;issue=1;spage=24;epage=28;aulast=Daulatabad

C E Pitt Cutting through the Paleo hype: The evidence for the Palaeolithic dietAust Fam Physician2016451358https://pubmed.ncbi.nlm.nih.gov/27051985/

J Blanton Implications of the Ketogenic Diet on Metabolic Syndrome2018128https://thekeep.eiu.edu/cgi/viewcontent.cgi?referer=https://www.google.com/&httpsredir=1&article=1000&context=health_project_papers

© This is an open access article distributed under the terms of the Creative Commons Attribution License - Attribution 4.0 International (CC BY 4.0). which permits unrestricted use, distribution, and reproduction in any medium, provided the original author and source are credited.