Banerjee: A glimpse of dietary recommendations for undernutrition children below five years of age in West Bengal

Undernutrition is one of the significant public health issues for developing countries like India. Although a decreasing rate still needs to concentrate more on the stunting and waste cases of under-five children living in every district in India. This short review study has mainly focused on West Bengal’s children under five years of age residing in rural and urban areas with various undernutrition issues. The study’s aim and objective are to assess the current status of undernutrition among children in India, precisely West Bengal. The open-access data from Unicef on stunting estimation and National Family Health Survey 5 (NFHS-5) data on key indicators for West Bengal were computed and analyzed as per available information. In addition, the nutrients data from Estimated Average Requirement (EAR) were also selected as per the requirements of 0-5 years of Indian children. Apart from basic level analysis, the dietary recommendations were also emphasized for the parents and stakeholders related to government and private community nutrition works. Moreover, the study shows a glimpse of undernutrition status and dietary recommendations for the below five years of children in rural and urban settings to make children nutritious.

Undernutrition is one of the most concerning public health issues in a country like India. A study showed that 80 % of children are underweight from 20 countries where India has approximately 60 million.1 Underweight or undernutrition is a type of malnutrition that may cause due to many reasons. Insufficient food quantities, breastfeeding practices, delayed weaning, recurrent infections, etc. More importantly, a balanced diet that contains the appropriate proportion of carbohydrates, fat, minerals, multivitamins, and above all, sufficient protein. There is no doubt that lack of parental knowledge in nutrition and nutrients among rural areas parents.2 The parents from urban and cities have more or less nutrition knowledge. Still, they are mostly busy in their professions and unable to meet their children’s nutritional needs due to various factors.

Vinod N, et al. 2011, explained that the severity of weight-for-age deficits and mortality rates were found to be strongly linked in six longitudinal studies of children aged 6–59 months. Malnutrition was estimated to be responsible for 6.3 million, or 54 percent, of the 11.6 million deaths of children under the age of five in underdeveloped nations in 1995.5 India is growing with the economy. However, the child mortality rate is still high in urban and rural areas due to undernutrition and related issues. Hence, there is a need to reframe health policies following the nutritional assessment on children based on parents’ financial status, knowledge of nutrition, interest, and motivation.

India is ranked 102 out of 119 countries as per the report published by the International Food Policy and Research Institute (IFPRI) on the Global Hunger Index (GHI). In India, National family health survey 4 (NFHS 4) showed that 36% of under 5-years of age children were underweight, 38% were stunted, and 21% were wasted.6 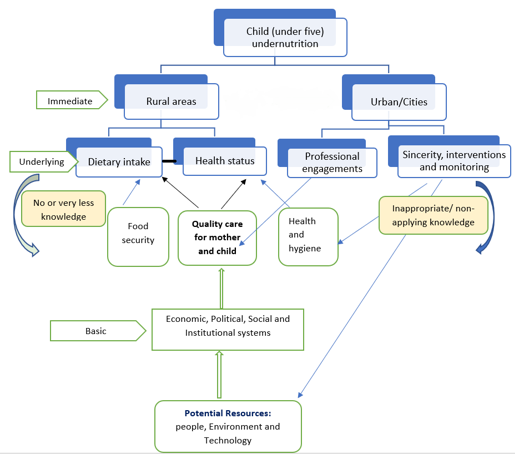 Figure 1. has focussed on child nutrition in general, starting from i) immediate causes or determinates, ii) underlying causes/determinates, and iii) basic causes or determinates both at urban and rural settings applicable globally. However, in the figure, urban people or parents are better in terms of financial status, knowledge, and resources than the rural or village level parents who are more concerned about Unicef/who malnutrition actions.9, 10

The rural parents need government supports at every level, whereas urban parents need to be more sincere and prompt in their actions because they are mostly busy with daily work, either business or jobs. An almost noticeable percentage of urban children under five are also affected with underweight and undernutrition that may also cause stunting or severely wasting. Hence, more awareness and nutrition education is needed to drive through private and government sectors to get children less undernutrition and somewhat more robust because children are our future.

In this mini-review, firstly, the data selected from Unicef (survey estimates) on Indian children under five living with stunting based on the parameters such as i) point estimation, ii) lower uncertainty bound, and iii) upper uncertainty bound numbers. The open-access data of India available for May 2021 has been presented graphically (Figure 2) in this study. Further, the latest data from the National family health survey 5 (NFHS 5) was also sorted and selected based on ‘key indicators’ to assess the feeding practices and nutritional status of the five children of West Bengal, focussing mainly the undernutrition. At last, a short recommendation has been suggested for the rural and urban parents for their children to manage a low-cost diet comprising all nutrients in a balanced way. In addition to diet, some lifestyle and feeding practices modifications are also advised for both the population.7, 8, 9, 10, 11

The Indian government is aiming and dedicated to reaching the Sustainable Development Goals by 2030. (SDGs). These nutrition-related goals are included in sustainable development goals: ending hunger, achieving food security, improving nutrition, and promoting sustainable agriculture (SDGs). As per the study’s 1st objective, here are some basic explanations on the stunting analysis based on the May 21 reports published by Unicef.12

Point estimation is the process of calculating a single value from sample data to serve as a “best estimate” of an unknown population parameter. Upper bound- If there are two constants C and N, such that U(n)= C*g(n) for n > N, then g(n) is the Upper Bound of A. Lower Bound - If L(n) is the running time of an algorithm A(say), then g(n) is the Lower Bound of A if L(n) >= C*g(n) for n > N.13

Therefore, in Figure 2. shows the estimation of stunting children already affected, analyzing the data from 2000 (no-1) to 2020 (no-21). The data is open-access available on the Unicef website that was published on May 21. The figure shows that the gradually decreasing numbers of stunted children in India. The numbers indicate that the point estimate value is 35120, the lower uncertainty bound value is 32178, and the upper uncertainty bound value is 40316 (in numbers). Secondly, in this study, another critical analysis is at the Indian under-five children population.7, 8, 9

Further, here is an analysis of under-five children feeding practices and nutritional status based on collected data from National family health survey 5 (NFHS-5; year-19-20) facts sheets. The latest data during 2019-2020 highlighted only the West Bengal state based on key indicators. Indian Institute of Health Management Research conducted NFHS-5 fieldwork in the concerned state from June 21 to November 8, 2019. A total of 18,187 houses, 21,408 women, and 3,021 men were surveyed and included in the open-access database of the NFHS website.10 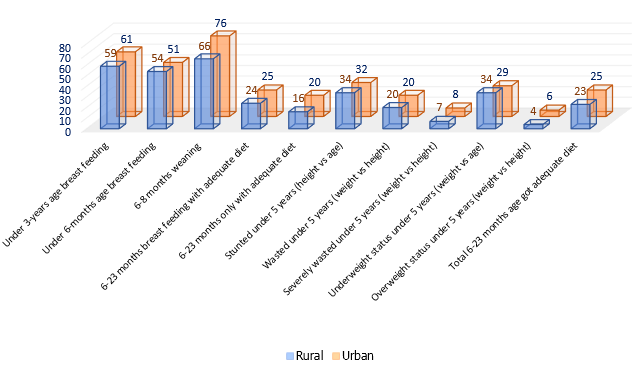 Under-5 children’s feeding and nutrition

Figure 3 shows one of the primary key indicators, “Child feeding practices and nutritional status,” concerning the 11 serial surveys in West Bengal as per the said period. Data shows that 34% of children are stunted from rural and 32% from urban. Almost similar 20% of children are wasted from both the settings whereas severely wasted are 7% from rural and 8% from urban. It’s also clear that only 23%-25% are receiving an adequate diet from both areas in India.

Nutrition awareness for parents and its utilization

The energy requirement for the 0-6 months baby is 530 kcal/day as per 5.8 kg body weight, and the protein requirement is 7gm. Similarly, 6-12 months, babies need 680 kcal/day with 9gm protein,170 mcg vitamin A, and 71 mcg of folate, while the average body weight is 8.5kg. All the values as per Estimated Average Requirement (EAR) per day basis. Further, while there is a nutrition matter among 1-5 years of children, there is a need for 1100-1400kcal.day energy with a minimum of 10-13 gm of protein as per EAR.14 More importantly, all the micro and macro minerals and multivitamins are equally needed for a child for proper development. There is a requirement of 400-450 mg calcium, 6-8 mg iron, 2.8-3.7 mg zinc, 65 mcg iodine. Additionally, 180-240 mcg vitamin A and 400 IU vitamin D per day are mandatory for an under-five child.14

It is commonly observed in primarily urban areas that a child does not eat properly or is reluctant to eat all types of food at the post-weaning period, even at the age of five. A physician sometimes recommends an enzyme syrup as an ayurvedic or modern medicine to get a primary stimulation of enzymes to get at least minimal appetite, leading to enough food consumption. However, a mother nearest to a child must spend enough time to feed her child at any cost despite their reluctance.

A child must meet all nutrients at any cost in every area, whether rural or urban. In rural areas, parents have no doubt financial issues that can be solved partially by NGOs, corporate sectors, and local administration. More earning opportunities are needed for the poor parents. It would be highly appreciable that the government policies towards the below-poverty communities should be more focused on making India malnutrition-free child.15, 16, 17

Uncountable numbers of children live with malnutrition, mainly with stunting, wasting in the developing countries, and India is one of the burning examples. Although there is a decreasing rate of stunting and wasting, there is still a need for massive government and private drive towards undernutrition, mainly in poorer sections in every district. Apart from general meals, there is a requirement for a suitable dietary recommendation that can be intervention by a dietitian or a community nutritionist. Above all, parents must take care of proper nutrition enriching with all the nutrients in the children’s daily meals. Hence, there is a need for not only food but nutrition.

A Dhone Epidemiological study of under-nutrition among children under five years in an urban slumMedical Journal of Dr. D.Y. Patil University201252110113

Sustainable development – knowledge platform by WHO. https://sustainabledevelopment.un.org/memberstates/india. Accessed on September 20, 2021.

S Banerjee The Essence of Indian Indigenous Knowledge in the perspective of Ayurveda, Nutrition, and YogaRes Rev Biotechnol Biosci202072207

© This is an open access article distributed under the terms of the Creative Commons Attribution-NonCommercial-ShareAlike 4.0 International License which permits unrestricted use, distribution, and reproduction in any medium, provided the original author and source are credited.