Background: According to World health organization, health is a complete state of physical, mental and social well being. Various factors are responsible for good health. One of the important contributors of good health is type of food consumed by the people.

Objectives: To assess the demographic and socio economic factors affecting the food habit and to assess the food pattern and nutritional status prevalent in working adults of Veraval city.

According to World health organization, health is a complete state of physical, mental and social well being. Various factors are responsible for good health. One of the important contributors of good health is type of food consumed by the people.

The top risk factors affecting DALY's (Disability adjusted life years), an economic indicator are related to diet & nutrition with maternal and child malnutrition being the top risk factor, followed by Air Pollution & Dietary Risks (Burden of Diseases 2016).1 This in an era of sustainable development goals the role of healthy diets is recognized to be associated with many SDG's and thus an emphasis on sustainable, resilient & safe food systems approach is being recommended. Improving children’s diets is the foundation of sustainable and prosperous societies and paramount to achieving the 2030 Sustainable Development Goals (SDGs) including Goal 2 to improve nutrition and end all forms of malnutrition. According to NFHS 4 (2015-16)2 data in Gir Somnath District it was found that some of the risk factors which increase the NCDs among the population of 15-49 years were women who are overweight/ obese were (BMI ≥ 25.0 kg/m2 ) 25.5% whereas men 21.3%. Blood sugar levels >140gm/dl 5.1% levels > 160gm/dl were 1.8%. Women having Slightly above normal (Systolic 140-159 mm of Hg and/or Diastolic 90-99 mm of Hg) blood pressure were 6.8 %, 6. Moderately high (Systolic 160-179 mm of Hg and/or Diastolic 100-109 mm of Hg) 1% and very high (Systolic ≥180 mm of Hg and/or Diastolic ≥110 mm of Hg) 0.5 % whereas Blood pressure level among men were 8.3%. 0.3% and 0%. Among the health status it was also found that Women whose Body Mass Index (BMI) is below normal (BMI < 18.5 kg/m2 ) was 16.9% similarly for men was 16.3% whereas women who are overweight or obese (BMI ≥ 25.0 kg/m2) 25.5% whereas men were 21.3%.NCDs are the leading cause of death in the world. The four main non-communicable diseases - cardiovascular disease, cancer, chronic lung diseases and diabetes - kill three in five people worldwide.Physical inactivity, unhealthy diets (diets low in fruit, vegetables, and whole grains, but high in salt and fat), tobacco use (smoking, secondhand smoke, and smokeless tobacco), and the harmful use of alcohol are the main behavioral risk factors for NCDs.

In light of the above scenario of GirSomnathDistrict a study was planned to see the impact of food pattern on health of working adults in Veravalcity.

Specific objectives of the study are

141 adults working in government or non government sectors we arerandomly selected from urbanVeraval. A questionnaire was developed and translated in local languageto elicit information on different variables.Background information of the subjects was elicited.Pre tested semi structured questionnaire was used to elicit information on Area,TypesofFamily,Types ofEmployer,Gender, Detailed FoodPattern,Medical history and Nutritional and health status of working adults. Height, weight of the subjects will be collected by following standard method for anthropometric measurements. Body mass index will be calculated using formula as Wt(KG)/ Ht(m)*HT(m).For weight measurement: Calibrated adult weighing scale will be used.For height measurement, non flexible not stretchable measuring tape will be used. Nutritional status of the subjects will be classified as per Asia pacific classification based on BMI for adults. Health status will be classified based on self reported history of various NCDs like diabetes, Blood pressure, hyper lipidemia etc.

Socioeconomic status of the enrolled subjects is presented in Table 1. Mean age range of the sample of (N=141) was found to be 43 years. Among them majority (83%) of the sample was APL. Seventy seven percent were living in urban area whereas 22.7 % in rural area. Sex ratio was found to be 46.8% male and 53.2 % female. According to social category it was found that majority of the sample was OBC (48.2%) followed by General (28.4%), SC (12.1%) and ST (11.3%). More than 90 percent of the population was Hindu by religion. More than half (61.7%) of the sample was Graduate by their educational status. Forty percent of the populationwere doing Government jobs followed by 35.5 % Non-Government Jobs among them only 2.1 % were servant and housewife.

Ninety one percent of the sample has Pucca house. Among the type of family it was found that 53.9 % were living in joint families whereas 46.1 % were in Nuclear families. It was also found that monthly income =Less than ₹25,000 is 35.5% followed by = ₹26000 to ₹ 49,000 (38.3%) and = 50,000 and above ₹50,000 (26.2%) respectively. Eighty percent of the sample has source of drinking water as private tap and only 2.1 percent were using hand pump. Above 90% of the population has close defecation drainage facility. The entire selected sample has Private toilet facility. Fifty five percent of the population has facility of canteen at their work place.

Health status is presented in Table 3.According to the medical history of sample collected it was found that the highest problem suffered by the sample was constipation (9.2%) followed by Diabetes (7.0%), Skin diseases and Obesity (4.26%), Gout and Thyroid (3.5%), Cholesterol (2.8%) and Arthritis (1.4%).None of the sample was having the history of Heart related problems, Cancer and Asthma.

Information on food groups consumed by the subjects is presented in Table 4. The entire sample selected consumed Grains, white roots and tubers, and Plantains followed by Dairy (97.2%), Other vegetables (96.4%), Pulses (83.6%) whereas more than 30 percent of samples consumed Iron Rich Foods (Bajri, Green Leafy vegetables, khajoor, jaggery, chana and Packed foods (Biscuits, toast, any packet) on that day. It was disheartening to know that less than 10 percent of the samples consumed Nuts and seeds, Meat, Fish and poultry, Eggs and Other fruits.

According to food frequency questionnaire it was found that among Grains, white roots and tubers, and plantaincommonly consumed items were Bajri. Makai, Jowar, Rice,wheatflour, Potatoes almost daily.

With respected to Pulses (beans, peas and lentils) it was found that consumption of items were thrice in a week or once in a week which were Bengal gram dal (chana dal), Red gram dal (tuver dal), Peas (vatana/matar), Green gram whole (sabot/mung/magni).

With respected toNuts and Oilseedsit was found that consumption of items were rarely consumed by the sample.

With respect to Dairy products it was found that almost all the samples consumed buffalo milk, curd and chaas (Buttermilk) daily.

With respect to Meat, poultry and fishit was found that only some of the sample were non vegetarian so it was most commonly consumed items were egg and goat meet once in a week.

With respect to Green leafy vegetables it was found that commonly consumed items were fengreek, drumstick, and spinach seasonally some of the items never like shepu, chana bhajibhindabhaji, chil nib haji and mudanibhaji.

With respect to Other vegetables it was found that almost all the items like karela, bottle gourd, brinjal, cauliflower , kankoda, bhinda were consumed mostly thrice in a week or once in a week.

With respect toother fruits it was found that fruits like apple, banana, grapes, lemondaadam were consumed thrice in a week and items like orange, sitafal, chiku, papya, mango, jamfal were consumed seasonally only.

The global burden of non-communicable diseases constitutes a major public health challenge that undermines social and economic development throughout the world. An estimated 36 million deaths, or 63% of the 57 million deaths that occurred globally in 2008, were due to non-communicable diseases, comprising mainly cardiovascular diseases (48% of non-communicable diseases), cancers (21%), chronic respiratory diseases (12%) and diabetes (3.5%). In India, nearly 5.8 million people (WHO report, 2015) die from NCDs (heart and lung diseases, stroke, cancer and diabetes) every year or in other words 1 in 4 Indians has a risk of dying from an NCD before they reach the age of 70. Targets to be achieved for NCDs according to Global Action Plan is presented in below 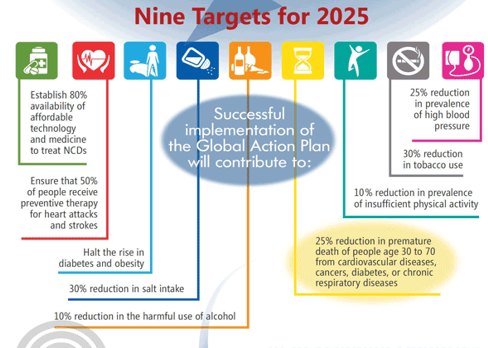 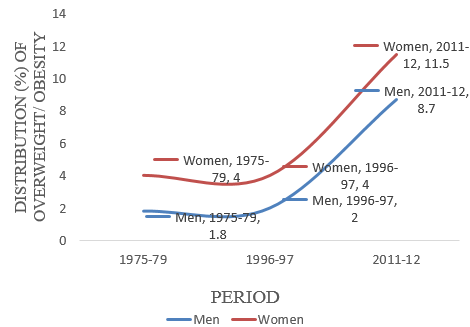 At present, the probability of an Indian, between the ages of 30-70 years dying due to one of the fore-mentioned NCDs is 23% (WHO, NCD India Profile, 2018).3 Therefore screening this age group for NCDs is of utmost importance. CVD will contribute to 29% of all deaths by 2030 as a leading cause of death (Jayanna et. al., 2019)4, indicating a clear urgency of addressing this challenge.

(Rao, et. al 2010)5 also revealed that the intake of all the foods except for other vegetables and roots and tubers was lower than the suggestedlevel among rural as well as tribal women. The prevalence of goiter was relatively higher (4.9%) among tribal women compared to their rural counterparts (0.8%). Tribal women were particularly vulnerable to undernutrition compared to women in rural areas. The prevalence of chronic energy deficiency was higher (56%) among tribal NPNL women compared to rural women (36%).(Vadera, et. al 2010).6 also concluded that the prevalence of overweight and obesity in the urban population in Jamnagar was found to be 22.04% and 5.20%, respectively.

The burden of Diabetes in India has increased from 26.0 million diabetics in 1990 to 65.0 million diabetics in 2016 with overweight as the major risk factor India’s NCDs country profile. Diabetes attribute to the highest increase in health loss among the major NCDs (Tandon et. al., 2018).7 CVDs contributed to 27% of total deaths in 2016 in India as compared to 15.2% in 1990. The leading risk factors included dietary risks, high systolic blood pressure, air pollution, high blood cholesterol, tobacco use, high fasting plasma glucose and high body mass index (Prabhakiran et. al., 2018).8 The contribution of cancer to total deaths doubled from 1990 to 9% on 2016 (Dhillon et. al., 2018).9 This indicated the urgency to address the NCDs with preventive measures which is the major objective of Ayushman Bharat.

Beegom, Niaz and Singh 199510 found that central obesity is a strong predictor of higher prevalence of diabetes, hypertension and coronary artery disease among Indian immigrants to Britain. Findings suggested that Indians could benefit by decreasing total fat intake to 21% kcal/day and by increasing physical activity with the aim of decreasing central obesity, to prevent hypertension in the community.

It is estimated that better hypertension control can prevent 400-500,000 premature deaths in India. Krishnan, et, al. 201611 found that a high burden of tobacco use and alcohol use among men, inactivity and overweight among women and low fruit and vegetable consumption among both sexes in rural population of Haryana.

Singh, Gupta and Ghosh 201512, 13 concluded that poor dietary diversitywith a predominantly cereals and fats based diet and a high prevalence of overweight was found among the free living adults in urban slumps of Delhi. Further he suggested Community based awareness programs for prevention of non-communicable diseases should incorporate healthy diet and lifestyle practices with emphasis on quantity and quality of nutrient intake. This must be considered as an integral part of chronic disease prevention strategy for underprivileged communities in urban India

Dual Burden of Mal Nutrition was found in working adults of Veravalurban. Also their dietary practices were poor. There need for sensitization of people in workplace setting on healthy diets.

B N Vadera S B Yadav B S Yadav D V Parmar S V Unadkat Study on obesity and influence of dietary factors on the weight status of an adult population in jamnagar city of gujarat: a cross-sectional analytical studyIndian J Community Med2015354482610.4103/0970-0218.74346

© This is an open access article distributed under the terms of the Creative Commons Attribution-NonCommercial-ShareAlike 4.0 International License which permits unrestricted use, distribution, and reproduction in any medium, provided the original author and source are credited.